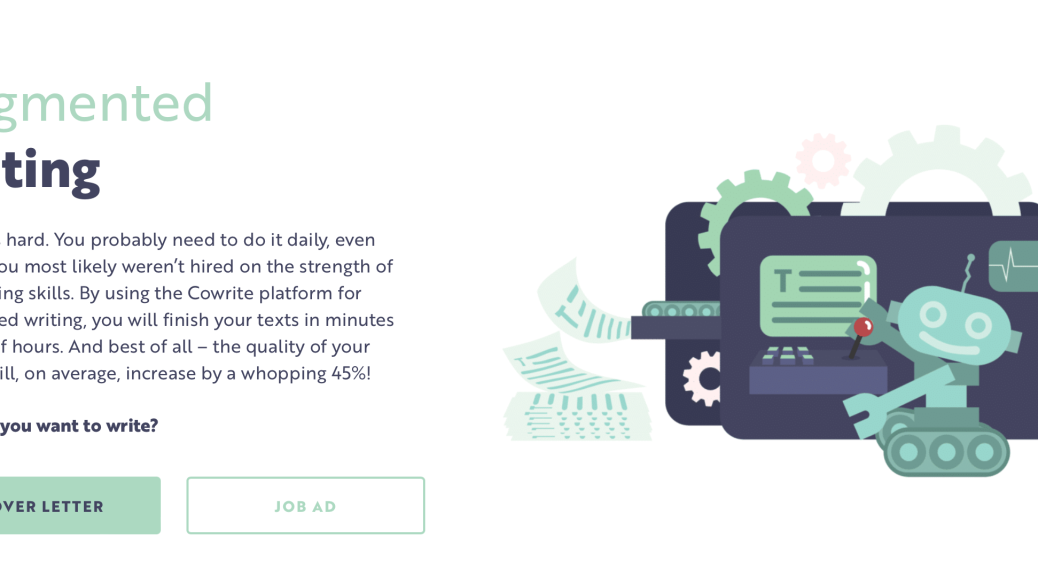 Stockholm-based Cowrite has created an NLG platform for what they call “augmented writing”. Their Cover Letter Builder, which is founded on wisdom from classical rhetoric, has been quite a success; according to one of the biggest clients, their users get employed 48 days faster than average.

Friends, contacts, and students who follow me, know that I am energized by the forcefield between tradition and novelty, between the enduring and the disruptive. Or as Swedish poet Gunnar Ekelöf once put it: “Det bestående är bra. Oppositionen mot det bestående är bra.” (‘The established is good. The opposition towards the established is good.”). Accordingly, I am fascinated by the way the NLG-focused tech companies are creating alliances between, on the one hand, computer techies and, on the other hand, linguists and rhetoricians.

After studying Cowrite’s template-based Cover Letter Builder and finding it very cool, I got in touch with co-founder Magnus Paues for some questions.

Hi Magnus! Please tell me the background story about Cowrite!
Cowrite started in 2014 with the objective to solve the problem of writer’s block. So much content is written in the world every day, and so many people think it is really hard. We wanted to provide a service to help them overcome the obstacles. We started out with real estate ads and recruitment ads and added cover letters and CVs after the outbreak of Covid-19.

What is your most popular service today, and why?
By far, it is our Cover Letter Builder that is the most popular service. It is provided in both English and Swedish, thus directed to a huge market. And, it solves a big problem. People, in general, seem to have an issue with describing themselves in a positive way. Also, few people know how to structure a text in order for it to be sold. Our Cover Letter Builder helps them with that.

Please tell me how the Cover Letter Builder came to be!
In March 2020, the world came to change in a very short time with the outbreak of Covid-19. Momentarily (thank god), our existing business areas more or less stopped dead in their tracks and we needed to find an alternative that produced revenue quickly. We realized that the unemployment rates rose, and therefore also the need for people to get help with job applications. We released the service to the Swedish and international markets in May 2020. And, wow, what a journey we were in for. Even with our former business areas back on their feet, the Cover Letter Builder came to be our biggest business area, and it just keeps on growing.

How does the CLB work from a user perspective?
Easy! The user answers questions about herself/himself, chooses tonality, and the cover letter magically appears in the adjacent document, in real-time. The cover letter is divided into text blocks that can be varied, which means that no two cover letters will be alike. The user can, of course, edit the text anytime in the process.

Please tell me about the structure of the letter created and how it is connected to classical rhetoric.
We have weaved a 2000-year rhetorical tradition into our algorithm, which means the text will be structured in the classical rhetoric disposition. The user’s cover letter will be built on the same building bricks that Aristotle used to persuade his fellow Greek citizens to believe whatever he had in mind when he woke up on a particular day. In short, the text has a background, an introduction, a statement of facts, arguments (proof of the fact), and a conclusion.

How do you think services like this will influence professional life and society in general? What do you see in the crystal ball in, for example, ten years?
I think there will be a lot of really great, automatically written content out there. Regarding cover letters: I think that our service will render cover letters obsolete in the long run. Today, cover letters are generally used as a “Sorting Hat” for candidates who can’t write. Many jobs don’t require writing skills, but your writing skills (or lack thereof) are what makes you miss or gain your opportunity. I think our service will make recruiters realize that the interview is the only forum where they can make a real assessment of a candidate since all cover letters will be absolutely perfect. So, less discrimination and more interaction, that’s what we aim for in the long run.

Please note: all texts on this blog are produced by me, Olle Bergman, and invited human writers. The only AI-based language tool used is Grammarly. When robot-written sections are added to serve as examples or to demonstrate a point, this is clearly indicated.